This was a funny visit where I tested Red Plum’s ability to understand English and be flexible. I had been to Red Plum before with so so experience. Read my prior post (Reliable Old Shoe Asian), click here.

Red Plum offers bastardized fusion Asian cuisine, from an authentically Asian perspective. Let me just say that there is nothing wrong with it if that’s what the local population wants. Hey, I live in a bastardized area and I deserve this Americanized version of Asian cuisine for being highly assimilated. 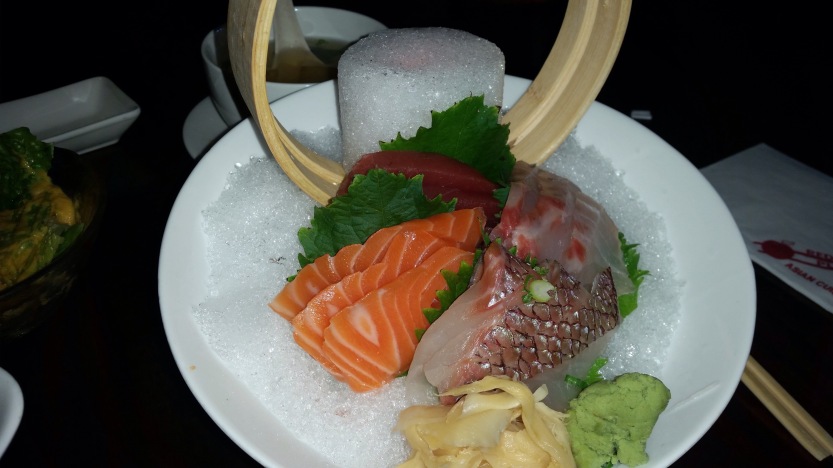 Sashimi Lunch: 12 pieces of assorted sashimi with rice, served with miso soup and salad. This was perfectly fine. Simple and straight forward for $13. They even put a light inside the ice-cube. The extra touch was fun. But in tomorrow’s post, I will show you how to have a lot more sashimi for not a lot more money. 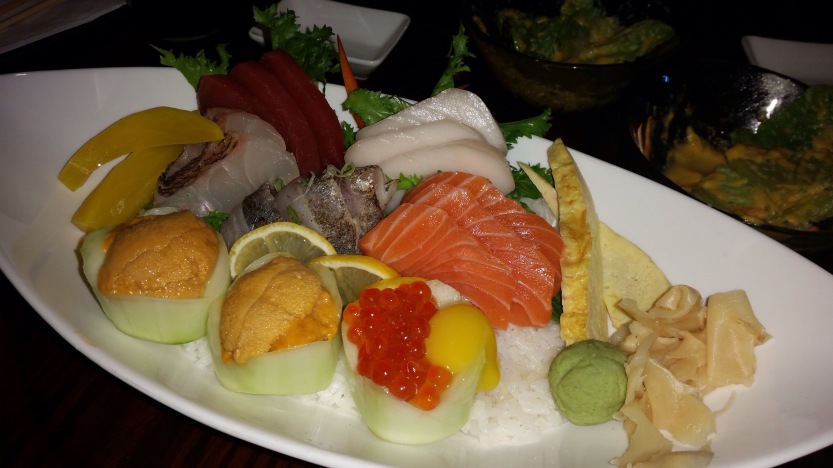 Chirashi Special: 17 pieces of raw fish and vegetables over sushi rice. This was also fine for $20. The fish was fresh and the uni was very tasty.

Here is where the story gets interesting. I went with a picky friend who insisted that sashimi must be placed on the rice in a bowl, like how it is done in Japan, and not placed directly on ice as how Red Plum always serves their sashimi. He has a point! When chirashi is served on a bed of ice, it is very cold and a lot less appetizing. Further, if that’s how the Japanese eat their chirashi, should the Americans and the Chinese really argue with it? Red Plum is run by the Chinese, as far as I can tell.

My friend explained his request once to the waiter. The waiter did not understand and brought in a waitress, who presumably has better language skills. In the meantime, the wait staff were talking to each other about this request all in Mandarin, which I understand. My friend explained it again, in English, to the waitress. Then came a long conversation, back and forth, with the waitress attempting to clarify the “weird” request and my friend not understanding why she doesn’t get it.

I finally could not listen anymore, after about five minutes of this… I interrupted in Mandarin and repeated the exact same request, in Mandarin, to the waitress. Her response to me was, “That’s really what he wanted?” She did understand him but she didn’t believe what she heard! She also confessed to me that they didn’t have a bowl! Hmm. No bowls in a Chinese restaurant… I told her that there must be one, somewhere back there.

Other than the fact that there is a cultural and language gap between the diners and Red Plum, I feel Red Plum did an excellent job serving the Americanized Asian food. The Sashimi Lunch and Chirashi were well priced and fresh. I will now return and only order in Mandarin! I am sure I will get outstanding service as well as getting a bowl for my meal.  🙂

P.S. This is my December writing challenge 5 of 17, writing one post a day until I leave for vacation.

3 thoughts on “Red Plum in Mamaroneck, NY- Take Two and A Challenge for the Bastardized Asian Cuisine”